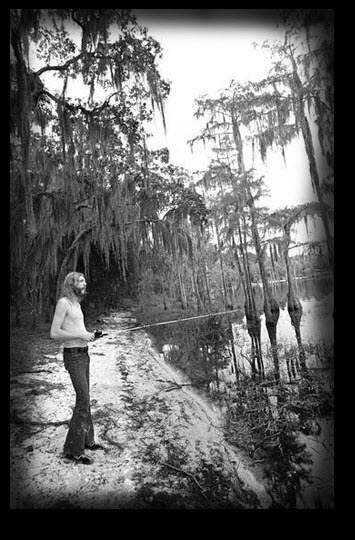 Duane Allman: A Man Who Touched, and Still Touches, Our Lives

Duane Allman lives on in the hearts and minds of those he touched with his music. Duane was dynamic, charismatic, and very much alive. So much so that many of us feel his presence today when we listen to his music.

Ed Shane hosted Duane Allman in 1970 on a one hour radio broadcast he called “The Duane Allman Hour” (it was a one-time event). Duane talks about life, music, Clapton, forming the Allman Brothers, the first two albums, and many other things.

Later that year, on December 9, 1970, Duane bopped into WABC-FM’s studios in New York where he was interviewed (?!) by Dave Herman. Duane was -on- and this is a fun interview as well as another glimpse into Duane’s philosophy of life. Darned perceptive 23 year old.

There isn’t much video out with Duane on it.   This commercially-shot video from the Fillmore East, NY, NY on September 23, 1970 is the best we’ve seen:

Duane told interviewer Tony Glover that at the start of the ’60s “One year Gregg got a guitar for Christmas and I got me a Harley 165 motorcycle. I tore that up and he learned to play. He taught me and I traded the wrecked bike parts for another guitar.” By 1961, Duane and Gregg were playing at teen dances around Daytona Beach, where they had lived since 1959. In 1963 they were in the House Rockers before organizing the Allman Joys. The Allman Joys toured bars in the SE and made their first single, a remake of “Spoonful” by Willie Dixon.

In the late ’60s they moved to Los Angeles and became part of a group called Hourglass, that put out two albums, “Hour Glass” and “Power of Love”. The band had no control over their material. As Duane said, “They’d send in a box of demos and say, ‘Okay, pick out your next LP.’ We’d try to tell them that wasn’t where it was at. Then they’d get tough.”

Disgusted, Duane returned to Florida where he hooked up with the drummer from the 31st of February, Butch Trucks. On many occasions they crossed paths with a band led by Dickey Betts that included bassist Berry Oakley. They also jammed with a drummer who toured with a number of bands, Jaimoe.

At the same time, Duane’s reputation as a session man was growing. Among the artists he backed up were Wilson Pickett, Aretha Franklin and King Curtis.

Still, he kept going back to jam with his friends in Florida and during one memorable jam in the Green House, the nucleus of the Allman Brothers Band was formed. A call to Gregg, who was still in California, to “come home” was all that was needed to complete the group.

Within months the Allman Brothers Band was being handled by Phil Walden, who encouraged them to move from Jacksonville to Macon, Georgia.

Their debut album on Capricorn Records, “The Allman Brothers Band” was recorded in 1969 and won excellent reviews. The band began their first national tour in support of the record.

By 1970, the ABB were gaining a reputation as one of the best blues and rock bands in the country. Their second LP, “Idlewild South” also sold well and the band continued to tour endlessly across the country. They also appeared at the Atlanta Pop Festival in 1970.

The ABB were a favorite of promoter Bill Graham and in their December 1970 appearance at his Fillmore East, they were in such rare form that they played encore after encore, not giving up the stage to headliner Canned Heat until 3:30 a.m. During their next Fillmore gig, in March 1971, tapes were made for their third album, “The Allman Brothers Live At Fillmore East”. This album easily reached gold status.

The band seemed on the way to galactic heights when they were rocked by the death of Duane. He lost control of his motorcycle on a Macon street while trying to swerve to avoid a tractor-trailer October 29, 1971.

Please Be With Me:  A Song for My Father, Duane Allman by Galadrielle Allman

Bands and Players on DuaneAllman.info