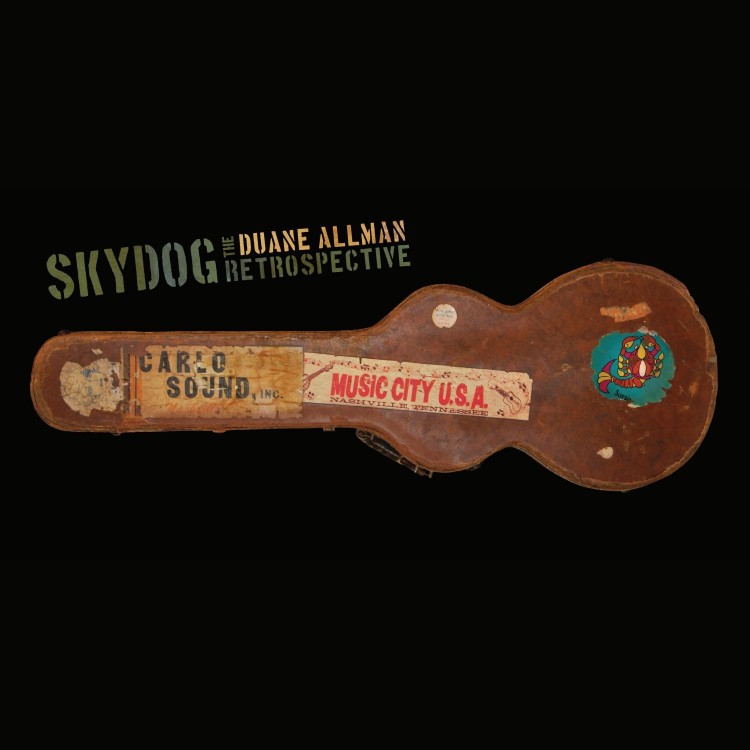 It’s difficult to call a guitarist who routinely shows up in the upper reaches of “100 Greatest Guitarists Ever” lists underappreciated, and yet the first impression the towering seven-disc box set Skydog: The Duane Allman Retrospective makes is that Duane Allman does not receive his proper due. Sure, the Allman Brothers Band are one of the staples of classic rock, a band that carved out the blues-drenched sound of Southern rock while also establishing a template for jam bands to come, and Duane’s contributions were crucial in making Layla & Other Assorted Love Songs Eric Clapton’s finest moment, and that would be enough for a substantial legacy even if Allman hadn’t died in a tragic motorcycle accident at the age of 24, but that was only part of the story. The rest is told on Skydog, a box set that has its origins on a collection Bill Levenson began in the early ’90s, just after he compiled the four-disc Allman Brothers Band box, Dreams, in 1989, which didn’t see fruition until 2013, after years of work by the renowned rock & roll archivist and Galadrielle Allman, Duane’s daughter. Both had their reasons for delivering a testament to everything Duane Allman achieved in his short life, and that dedication pays off wildly on Skydog, as great a box set as has ever been released.

Much of the greatness in Skydog lies in its thoroughness, how it treats Allman’s work outside of the Allman Brothers Band not as a digression but rather a focus. The Allman Brothers Band account for just 21 of the 129 songs here, not popping up until toward the end of disc three, by which time Duane has been heard playing gangly R&B guitar in his teenage R&B band the Escorts, expertly mimicking the Yardbirds in the Allman Joys, marrying psychedelia and blues in the Hour Glass, essaying an early version of “Melissa” in the 31st of February, and, especially, making himself heard on sessions for Clarence Carter, Wilson Pickett, Laura Lee, King Curtis, and Arthur Conley recorded down in Muscle Shoals, Alabama (sessions with Aretha Franklin were cut up in New York). He’d also traded solos with Otis Rush and blazed a trail on Boz Scaggs’ eponymous 1969 LP, sessions that emphasized how his guitar was getting increasingly gutsy and gritty, characteristics that could be heard on the Allman Brothers Band’s 1969 debut. Positioned as it is here, the first Allmans album is not the start of something, but rather a pivotal point in a long journey that continued to unfold long afterward. On-stage, the Allmans improvised with imaginative ferocity, and the back half of Skydog showcases a restless, fearless musician, one who was eager to tangle with his idol Eric Clapton in Derek & the Dominos, rush on-stage with the Grateful Dead, guest with Delaney & Bonnie, and sit in with jazz flautist Herbie Mann. By the end of the set, Duane Allman seems to have had his hand in every kind of music being made in America at the turn of the ’60s, and the depth and scope of his achievement is staggering, especially when you consider that so much of this was recorded in a mere four years. While the records released by the Allman Brothers Band do hint at this range, Skydog tells a story unheard on any other Allman-related albums, including the excellent 1989 box Dreams. This is an epic narrative illustrating how soul, blues, country, psychedelia, jazz, and garage rock melded into modern rock & roll and, in turn, this is a biography of a musician who was instrumental in that evolution, a guitarist whose name is well-known but whose work is still not thoroughly appreciated. Skydog rights that wrong in glorious fashion.

ALBUM NOTES
Even if he’d never formed the Allman Brothers Band, Duane Allman would be a major figure in American popular music. Long before his name became known to mainstream audiences, he had already established his credentials as a once-in-a-lifetime guitar visionary, leaving his unmistakable stamp on a broad array of recordings. Rounder Records, a division of Concord Music Group, will release the most ambitious retrospective of Allman’s short but influential career titled Skydog: The Duane Allman Retrospective.

In her recollection of her father, who died when she was a young child, Galadrielle writes, “I am very lucky that my father is Duane Allman, an artist who left behind a wealth of incredible music . . . Working on this retrospective, I have gotten closer than I ever have been to understanding my father’s development as a musician and a man.”

Duane Allman, known to his bandmates as Skydog, was born in Nashville in 1946. With Gregg, his only sibling, Duane had his first moment of musical revelation upon witnessing a late ’50s R&B bill that featured B.B. King and Jackie Wilson. By 1960, both Duane and Gregg owned guitars and played in a series of neighborhood garage bands in Tennessee and Florida. Continuing their interest in blues and R&B in the shadow of blues radio station WLAC-AM’s continent-spanning signal, as well as absorbing the influence of the British Invasion, the brothers launched the Escorts in 1965 and the Allman Joys, who recorded a handful of sides in Bradley’s Barn in Nashville in 1966. By 1967, Duane and Gregg signed to Liberty as the Hour Glass and recorded two albums in Nashville and Los Angeles. When the band sought to defy the label and spread its musical wings, they were dropped. The brothers returned to Florida, hooked up with drummer Butch Trucks, and recorded two sides as the 31st of February, and later at Ardent Studio in Memphis as the Bleus.

By this time Duane had developed a reputation as a leading session guitarist. He was on Fame Studio’s A list, his guitar licks coloring hits by Wilson Pickett. Atlantic Records producer and executive Jerry Wexler took note and hired him to perform on Atlantic sessions by King Curtis, Otis Rush, Arthur Conley, the Soul Survivors and Sweet Inspirations. Wexler signed him to a solo Atlantic deal, resulting in a session that contained the raucous original “Happily Married Man” and more. The session, contained on the Skydog set, was abandoned mid-stream. But by then Capricorn Records’ Phil Walden had noticed the rumblings from Muscle Shoals. Duane gathered up brother Gregg, Dickey Betts, Berry Oakley, Butch Trucks, Jai Johanny Johanson and others and the Allman Brothers Band was born.

According to reissue annotator Schinder, “The [Allman Brothers Band’s] music was complex and adventurous, yet unfailingly accessible. The subtle and harmonic interplay between Duane and Dickey’s dual lead guitars was matched by the three-man rhythm section’s surging, swinging cross-rhythms, with Gregg’s massively expressive singing and organ playing keeping the music firmly grounded in human emotion.” The band’s profile grew with each release — the self-titled debut, Idlewild South and eventually the band’s breakthrough, At Fillmore East.

Testament to his energy and ambition, Duane still found time for side projects. When bandmates would hole up at home after tours, Duane joined fellow world-class guitarist Eric Clapton on Derek & the Dominos’ Layla and Other Assorted Love Songs. While not an official member, he quickly emerged as a major contributor to the classic album, his twin guitar interplay with Clapton shaping the hits “Layla” and “Why Does Love Got To Be So Sad.” He also worked with Delaney & Bonnie & Friends and Laura Nyro between Allman Brothers Band projects.

By then acknowledged as one of rock’s premier guitarists, Duane and the Allman Brothers Band began recording their follow-up to At Fillmore East — Eat a Peach. Tom Dowd, another legendary Atlantic house producer, oversaw sessions at Criteria Studios. Then on October 29, 1971, four days after Fillmore had been certified gold, Duane was riding his motorcycle and swerved to avoid hitting a truck. He crashed and died of internal injuries. He was 24 years old.

The band forged ahead as a quintet on Eat a Peach, which became one of their best selling albums. The Allman Brothers, led by Gregg Allman and Butch Trucks, continue to perform to this day.

Schinder notes, “More than four decades after his death, Duane Allman remains a towering figure whose stature has only increased in his absence. His influence lives on, not only in the multiple generations of guitarists who have been motivated by his input, but also in the legions of listeners who have continued to find inspiration in his vibrant vision of American music, which remains as fresh and truthful today as when it was created.”

“When a musician of my father’s caliber dies, every note he ever recorded becomes even more precious,” writes Galadrielle. “Each song is pressed into the service of telling his story. The longer Duane is gone, the clearer it becomes that there will never be another like him.”

“I hope the celebration of Duane’s life inspires you to live fearlessly and enjoy life,” Galadrielle concludes. “I know that would have made him proud.”